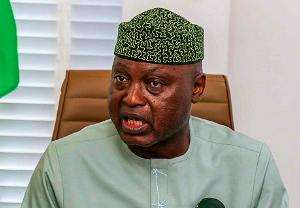 Ekiti State Governor Hon Biodun Oyebanji on Thursday appealed to members of the All Progressives Congress in Ekiti to continuously market the party’s presidential candidate Asiwaju Bola Ahmed Tinubu in a bid to win the 2023 election.

The governor said so when swearing in the newly appointed commissioners and special advisers, noting that appointments under him are made solely on merit and competence.

Oyebanji clarified that the fact that the new appointees are mainly technocrats and apolitical figures does not mean that the political class is neglected in the scheme of things.

He said he was wary of the fact that he had to appoint those to his cabinet who would not be distracted by politics, and said that was one reason why he appointed technocrats as drivers…